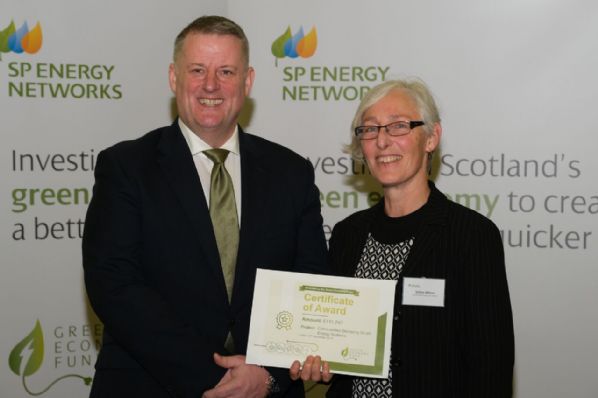 Community Energy Scotland has been awarded over £110,000 funding from SP Energy Networks’ Green Economy Fund to help us support eight local communities build their knowledge and capacity to develop local energy initaitives – including working with Greener Kirkcaldy in Fife, South Seeds in Glasgow and Ettrick and Yarrow Community Development Company in the Borders.

The community organisations we support will receive direct guidance and briefing from Community Energy Scotland to help develop their grassroots community energy projects that aim to tackle fuel poverty especially among vulnerable residents.

The funding will also help the community groups to explore business models for such energy projects (that could include community-owned renewable generators and smart energy systems) in a bid to strengthen the local green economy.

SP Energy Networks’ CEO Frank Mitchell revealed the successful projects at Glasgow’s iconic Riverside Museum and encouraged other green projects to apply for the second round of funding.

“Community Energy Scotland is carrying out vital work across the country to ensure grassroots projects such as Greener Kirkcaldy has the tools and resource it needs to support their region’s most vulnerable residents and help encourage the development of community-owned renewable energy sources.”

“Greener Kirkcaldy is just one of several projects we are supporting thanks to funding from the Green Economy Fund. Some of Kirkcaldy’s most vulnerable residents rely on community schemes to provide vital advice and support to help them tackle fuel poverty. We will work alongside Greener Kirkcaldy, providing information, training and advice to help them develop local, smart renewable energy projects that benefit the local community and ultimately strengthen the local green economy.”